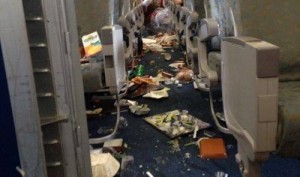 Serious injuries that occur in-flight are quire rare, but they do occur. Slips and trips are common and expected, considering so many people are in such close proximity. Baggage can fall from overhead bins resulting in injury.

Minor, serious, and even fatal injuries can occur. These injured passengers may have legal recourse against the airplane manufacturer, part manufacturers, the airline, airline employees, or even the Federal Aviation Administration in some cases.

Falling luggage accounts for approximately 4,500 injuries each year. People are also injured by those rolling food carts that have slammed into everyone’s elbow at least once. It’s also common to be accidentally struck by other passengers as they move about the cabin.

The possible legal claims of passengers depend on the cause of the injury:

1. Negligence: Was the injury the result of carelessness of an employee of the airline? It might be the pilot, flight attendant, or even a ground crew member. These employees have a legal responsibility to be reasonably careful and maintain safe conditions.

2. Turbulence and other ‘acts of God’: Acts of God, including turbulence do not create liability for the airlines in most cases. However, the pilot can frequently see or predict when turbulence is likely to occur. He or she then has the responsibility to inform the passengers of this possibility. So, if the pilot predicted turbulence but failed to communicate that fact or should have been able to predict it, but didn’t, liability is created for both the pilot and the airline.

3. FAA negligence: The FAA is charged with controlling airline traffic. Any in-flight crashes or fender-benders on the ground that can be contributed to FAA employee negligence create the possibility of financial damages for those that suffer an injury.

4. Product issues: Broken seatbelts, broken overhead bin latches, and other similar equipment failures can have the potential for a liability claim. It might be against the manufacturer for a faulty product or against the airline for poor maintenance.

Airlines are typically very large companies that are also in a very cost conscious industry. It is especially important to get the proper legal representation to be success in your personal injury lawsuit.